The boy who ran away to play guitar.

By milos on May 28, 2020 in guitar, music, online classes with Comments Off on The boy who ran away to play guitar.

It’s a hot summer day in Eastern Spain. The scent of figs fills the air, cicadas buzz. Somewhere a church bell clangs. A few plucked guitar notes can be heard drifting from a shady plaça corner.

Let’s consider the interesting twists and turns in the life of Francisco Tárrega. Perhaps it’s more legend than truth, but the “father of classical guitar” seemed to have followed a fated path in his pursuit of his chosen instrument.

Even from a young age, Francisco Tárrega knew what he wanted. And more than anything, it was to play the guitar. Let’s imagine him as a small boy, sneaking in to play on his fathers treasured instrument while dad worked as a watchman at the local convent. Or listening avidly while his father played Flamenco. His ear tuned to the chords and notes. It was clear that he had an aptitude for the stringed instrument right from the beginning.

Growing up during the Romantic era, the young Francisco began his adventurous life running away from home. This independent streak resulted in a series of incidents which were to influence his whole life!

Little did he know on that hot summer day as he escaped the clutches of his nanny, what was to follow. Indeed as he ran, the cicadas calling, dust puffing up from his feet, he chanced to look back (at her maybe), and fell into an irrigation canal. His flight to boyhood freedom stalled. Through luck or fate, his future path was cemented.

Tárregas eyes were injured so badly in the fall that his father decided that Francisco was to become a musician. A career in which you didn’t need your eyes. And it was settled. The entire family was uprooted from Tárregas birth town of  Villarreal, schlepped across the river Mijares to Castellón de la Plana, so that he could attend music classes.

Indeed the first two of his music professors were themselves blind. A life’s journey was set in motion. Francisco Tárrega began to learn the piano and guitar.

When he was ten years old, the famous Spanish concert guitarist Julián Arcas heard Tárrega play and recognising his talent, begged his father to allow him to accompany him to Barcelona, so that he could tutor the boy. His father reluctantly agreed.

In Barcelona, Francisco was set to continue his study of both the piano and the guitar, but it wasn’t long before the unwatched youngster had run away a second time. Loose on the streets of Barcelona. He was soon found playing his little guitar in coffee houses and restaurants, and taken back under the wing of his father.

Despite his father’s great sacrifices to set him straight and on the path of formal piano playing, Francisco’s fingers itched to play the guitar, and three years later, ran away for a third time at the mere age of thirteen, joining a group of Gypsies in Valencia where he improved his flamenco skills and perhaps his life skills too.

Nevertheless his dogged old Dad came to find him and dragged him home, only for Tárrega to run a fourth and last time! All for the love of guitar! Back to Valencia where by this time his playing had become proficient enough for him to start earning. For a time, he played with other musicians at local engagements to earn money, but eventually he returned home to help his family, who had found themselves in dire financial straits.

Perhaps Tárrega was feeling responsible for his family, or maybe just finally grown up. Whatever the case, he was able to repay his family’s dedication and worked hard playing the piano and guitar in various villages to aid them. By 1874 and at 22 years of age, his luck changed again.

Francisco entered the Madrid conservatory under the sponsorship of a wealthy merchant named Antonio Canesa who had happened upon his playing by chance at a rural casino in the village of Burriano. He brought along with him a recently purchased guitar, made in Seville by Antonio de Torres. Oddly enough it was the self same guitarist Julián Arcas who had encouraged Torres to pursue making guitars as his full time profession. It seems that the guitar was so well made, and it’s sound so suited Tárrega that he rarely played on any other type. This guitar both inspired his music and influenced his style. 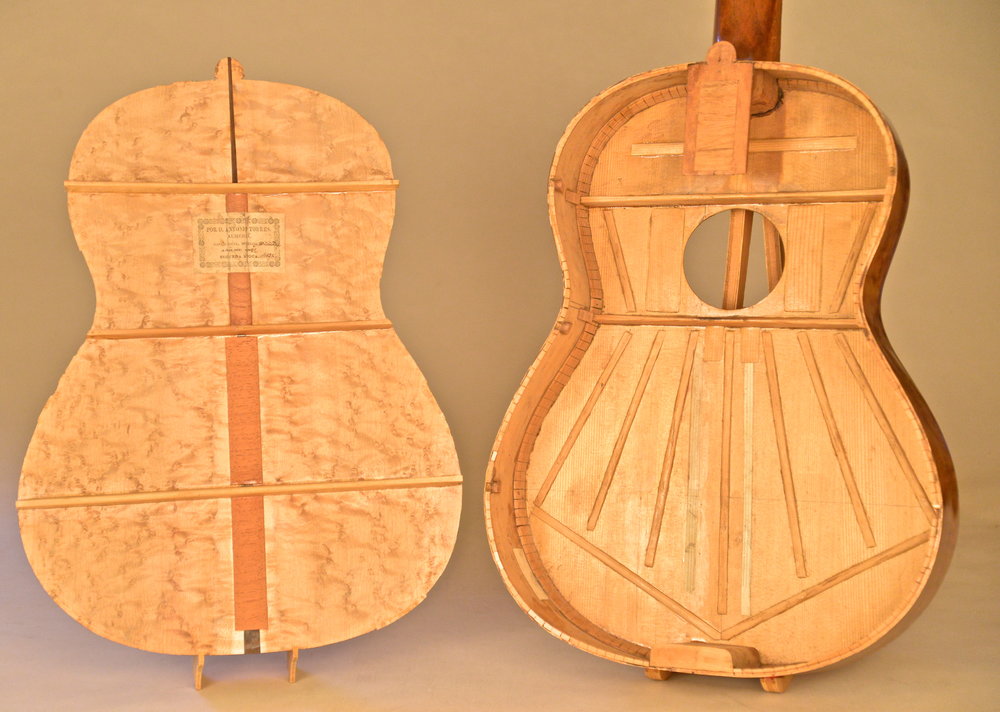 At the conservatory, Tárrega studied composition under Emilio Arrieta who convinced him to focus on guitar and abandon the idea of a career with the piano. Despite the current views (and those of his father) that the guitar was only an instrument to accompany singers, and the piano was most popular throughout Europe, Tárrega did not take much convincing. Playing the guitar was something that he had loved since he had been a small child.

By the late 1870s Tárrega was set up as a professional music teacher and musician and taught (most famous amongst them) Emilio Pujol, Miguel Llobet, and Daniel Fortea, thus passing on his knowledge and all the while fine tuning his work through rigorous study and practice. Soon he was composing his own music and touring the country, giving regular performances. Even transcribing important piano works into pieces for guitar.

His frequent concerts resulted in the meeting of his future wife as well as one of his most famous compositions, “Lagrima” or The Teardrop, which was written when he was touring in London, miserable and homesick for Spain. Upon returning to his homeland in 1880, he was married and eventually settled in Barcelona, not too far from where he had grown up.

Under the patronage of wealthy widow, Conxa Martinez, Tárrega mellowed. No longer running to pursue his dreams, he relaxed into perfecting his art. His patronage allowed him and his family use of a house in Barcelona rumoured to be somewhere on c/ Gignas, where he would write the bulk of his most popular works. Later Conxa Martinez took him to Granada, where the guitarist conceived the theme for Recuerdos de la Alhambra. Tárrega continued to perform live, but he preferred to stay in his native country.

A few years before his untimely death, Tárrega made an important change in his playing. He cut his nails. To a classical guitarist playing on gut strings, the use of ones nails to pluck out the notes was all important. Used similarly to a plectrum on steel strings, the nails are used to play on Spanish or Classical nylon stringed guitars. No-one is quite sure of the reason for Tárregas choice and there appear to be various opinions, but the fact remains that this changed the style and more importantly, the sound of his playing forever. Callouses built up on his fingertips and with these he continued to play. Tárrega loved this new sound so much that he enforced nail trimming among all his students.

Sadly despite the earliest recordings of guitar documented in the 1900s, there are no recordings of Francisco Tárrega himself playing. His compositions have survived and indeed his genius continues to live on in the fingertips of guitarists the world over. The great Spanish guitarist is fondly remembered by contemporaries and students alike and his work has earned him tremendous acclaim not only in his homeland but also around the world as one of the most formidable musical champions of all time.

You can find out more about this great guitarist on the following websites:

Are you interested in learning some of the pieces composed by Tárrega? Take an online guitar lesson with one of our fantastic and talented Spanish guitar teachers! Follow in Tárrega’s footsteps!